An access point (AP) can create two or more networks on the same Wi-Fi radio. This capability, known as Virtual AP (VAP), makes a single physical AP appear as if it were multiple APs. It allows APs to create separate wireless networks to accommodate different user and security requirements.

An AP announces a wireless network by transmitting a beacon frame (about) ten times per second (using the default beacon interval). The AP will transmit multiple beacon frames for multiple networks, which means that as the number of networks (SSIDs) increases, the airtime consumed by beacons also increases (Who hasn’t seen Andrew von Nagy’s SSID Overhead Calculator? Check out the iOS app, too.)

Let’s look at the following example using WiFi Explorer Pro 3’s Utilization Inspector. The Utilization Inspector displays the beacon overhead for each Wi-Fi channel. In this case, we have a packet capture containing the beacons transmitted by a single AP on channel 1. The AP has four SSIDs, and it’s configured with a minimum basic rate of 1 Mbps. The estimated beacon overhead is 11%. In other words, the AP uses 11% of the available airtime to transmit beacons.

The beacon overhead of an AP transmitting four separate beacons, ten times per second, is 11%.

Ratified on February 9, 2021, the IEEE 802.11ax-2021 amendment, also known as Wi-Fi 6, is a collection of enhancements for high-efficiency wireless networks. One of those enhancements is using the Multiple BSSID element to save the AP from transmitting a beacon frame per SSID, reducing beacon overhead when using virtual APs. The Mulitple BSSID element allows an AP to collapse information from multiple networks into a single beacon or probe response.

Revisiting our last example, if the same AP included a Multiple BSSID element to announce the four SSIDs in a single beacon, it would only incur a 4% beacon overhead. That’s a difference of 7% when compared to sending four separate beacon frames, one for each SSID.

The beacon overhead of an AP sending a single beacon, ten times per second, is 4%.

The Multiple BSSID element contains a field called Max BSSID Indicator, which specifies the maximum number of BSSIDs in the multiple BSSID set (do not confuse with the number of active BSSIDs, which the AP does not indicate). It also contains a list of optional subelements. There are two types of subelements: Nontransmitted BSSID Profile and Vendor Specific.

The SSID element (ID 0) contains the identity of the ESS, IBSS, or mesh network. If the network is hidden, the SSID is a zero-length string.

The Multiple BSSID-Index element (ID 85) identifies a nontransmitted BSSID within the set of multiple BSSIDs.

The Nontransmitted BSSID Capability element (ID 83) includes the contents of the Capability Information field in beacons and probe responses for the BSS. It specifies, among other things, whether the nontransmitted BSSID is part of an ESS, IBSS, or mesh network or whether a short preamble is supported. 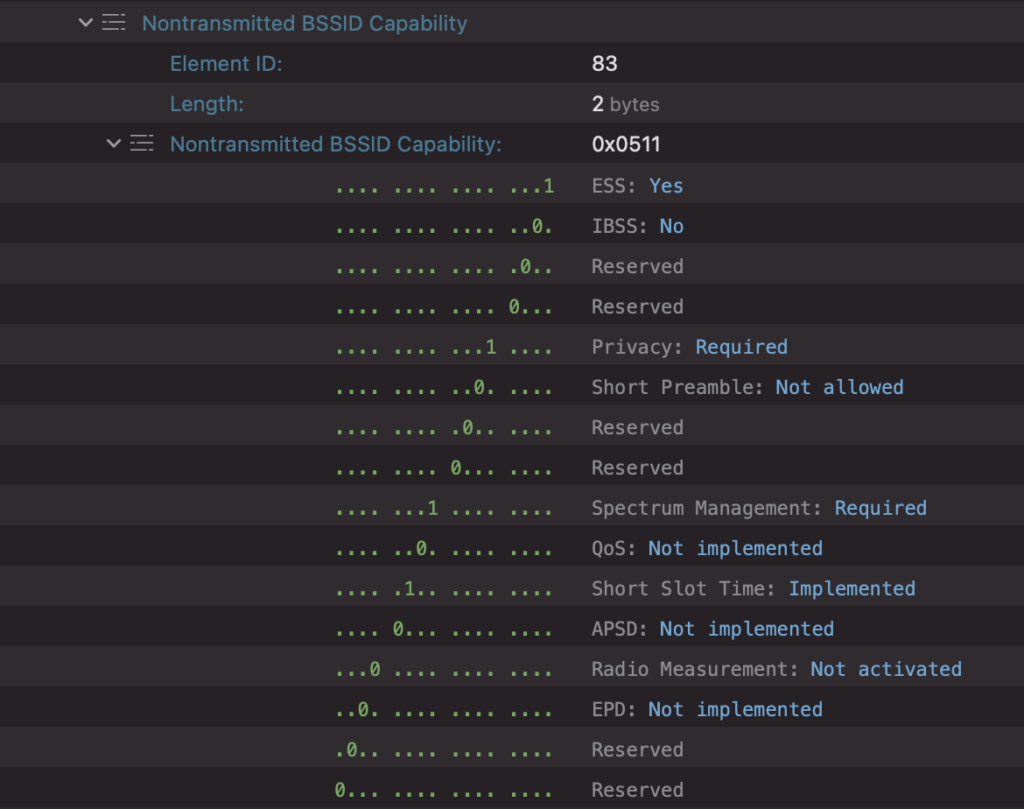 The Non-Inheritance element (ID 255, ID Extension 56) identifies one or more elements that are not inherited by the nontransmitted BSSID. It specifies two lists of elements: a list of element IDs and a list of element ID extensions. Suppose an ID in either list matches the ID of an information element in the beacon or probe response that carries the Multiple BSSID element. In that case, that information element is not considered an element of the nontransmitted BSSID.

Networks evolve, and so does WiFi Explorer Pro 3

Finding 6 GHz networks in WiFi Explorer and WiFi Explorer Pro 3 is still limited due to the lack of Macs with Wi-Fi 6E hardware. However, we have constantly been updating the apps to fully support 6 GHz and all of the new capabilities, including the Multiple BSSID element. WiFi Explorer Pro 3 can already import packet captures containing 6 GHz networks or do a remote scan in the 2.4, 5, and 6 GHz bands using a compatible Linux computer and an Intel AX210 card. It will also find and display nontransmitted BSSIDs (networks included in the Multiple BSSID element).

In this blog, we’ve described one of the 802.11ax features designed to increase the efficiency of Wi-Fi networks. Beacon frame transmissions may cause a considerable overhead in environments with a large number of SSIDs. By using the Multiple BSSID element, an AP can reduce the beacon overhead by collapsing the information of multiple SSIDs into a single beacon or probe response frame. This capability is mandatory for APs operating in the 6 GHz band, and as we’ve mentioned, it means Wi-Fi tools, such as Wi-Fi scanners, must be updated to find and display all networks advertised by a Wi-Fi 6E AP.

Thanks to Josh Schmelzle for providing the 6 GHz captures used in this blog and the discussions around Wi-Fi 6E.

Adrian is the CTO and Lead Developer at Intuitibits LLC. He started developing wireless tools for iOS and Mac in 2009. He's interested in programming, UI/UX design, wireless networks and enjoys cooking, soccer, and LEGO building with his kids.