You can capture packet traces from your iPhone, iPad, or iPod touch using Airtool 2. A packet trace capture from an iOS device records traffic at the network layer (Layer 3) passing through all interfaces, including Wi-Fi, AWDL, and cellular.

Packet traces are useful for investigating complex network problems related to connectivity and performance. For example, you can use packet captures to validate the network’s quality of service configuration or analyze under which circumstances Wi-Fi or cellular handoff occurs.

To capture traffic from your iOS device, Airtool 2 uses a tool called Remote Virtual Interface (RVI). RVI is a mechanism that allows you to create a virtual network interface on your Mac and use tools like tcpdump to capture packets from the iOS device attached to that virtual interface.

The process outlined by Apple to use RVI is very much manual. You connect your device to your Mac, find out the UUID of the device, use the UUID and a command-line interface tool to create the RVI for the device, and then do the capture using tcpdump by passing the name of the RVI interface and the desired tcpdump options. Airtool 2 automates this process and makes capturing traffic from your iPhone, iPad, or iPod touch a 1-click operation.

If you haven’t already, install Xcode from the Mac App Store. When you first launch Xcode and install the additional required components, it installs the rvictl tool.

You may verify that rvictl is correctly installed by opening Terminal and typing:

If you get the message command not found: rvictl, then rvictl is not installed or cannot be found. To troubleshoot RVI, see Troubleshooting the Remote Virtual Interface (RVI) in Troubleshooting Packet Traces.

System extensions need to be enabled on a Mac with Apple silicon.

Note: If you’re still unable to capture a packet trace after enabling system extensions, go to System Preferences > Security & Privacy > General and click “Allow” to finish the installation of Apple’s system extension required to use the RVI tool.

After installing the RVI tool, capturing from your iPhone, iPad, or iPod touch using Airtool 2 is straightforward:

Because RVI represents the entire network stack of the iOS device, you cannot target a specific interface (e.g., Wi-Fi or cellular) on your iOS device as you would do on the Mac, so Airtool 2 saves information about the interface in the packet metadata. Then, in Wireshark, for example, you can choose to display the interface name for each packet. 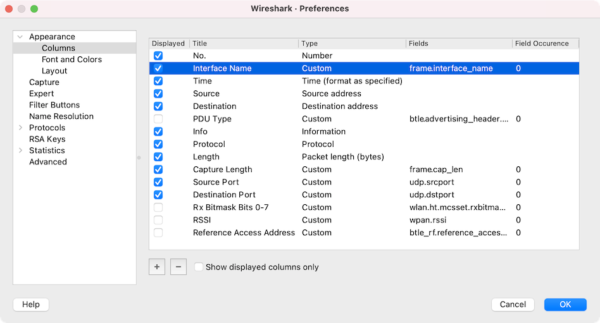 You can add a column to display the interface name in Wireshark.

You can also filter the trace based on that interface. For example, if you only want to display traffic from the AWDL interface, use the filter expression frame.interface_name == "awdl0"

Making sure RVI is installed and functional can be challenging, especially on a Mac with Apple silicon, but once RVI’s working, capturing from your iPhone, iPad, or iPod touch should work without any issues. However, here we describe two problems that may prevent you from capturing from your device successfully and how to resolve them:

I’ve connected my device, but I can’t see it listed in the Airtool 2 menu.

The capture fails with “Unable to create or open capture interface.”

On a Mac with Apple silicon, the first time you try to capture traffic from your device after enabling System Extensions, the capture may fail because macOS needs your permission to load or update the system extension that the RVI tool requires to function. Go to System Preferences > Security & Privacy > General and click “Allow” to allow the system extension. After restarting, Airtool 2 should be able to use RVI to capture traffic from the device.

You need to authorize the system extension after the first time Airtool 2 tries to use RVI.

If you’re still unable to capture from your device, please contact us.